Did you know there are several different types of tennis strokes? Those stokes are serve, ground stroke which can be a forehand stroke or backhand stroke, volley, lob or overhead. A continental grip is commonly used with a serve, volley or overhead stroke. Each stroke can be used strategically at different points in a set. 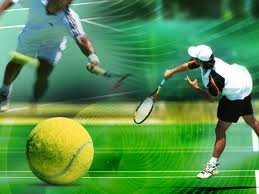 Here are the the most common types of tennis strokes:

Ground Stroke: A ground stroke can be performed with a forehand or backhand grip. Typically a ground stroke is used when the player is not more than a few feet away from the baseline.

Backhand Ground Stroke: To perform a backhand ground stroke the player will swing their racket away from their body on the opposite side going towards the dominate hand.

Lob: A lob stroke is when the player hits the ball well over the top of the opponent’s head so the ball will land deep in the court towards the baseline using a forehand or backhand grip. A lob is a great shot for defensive scenarios or when a player’s opponent is likely to close the net. A high lob can be used to buy a player time to allow them to move back into position.

Overhead: An overhead stroke is any shot besides the hit that the ball hits the racket’s long axis close to vertical. The point of contact between the ball and racket with this stroke is typically above the players head. An overhead stroke can be used to hit off an opposing player’s lob stroke.

Once a player has a better understanding of the different types of tennis strokes they can continue to improve their playing skills. It is important to make sure to use correct body mechanics when performing these strokes to prevent tennis elbow pain and other possible injuries. Through JOI’s Rehabilitation Sports Center a player can get a tennis serve video analysis with feedback. A player can also receive multiple performance assessments and a customized training program based on the results from their testing. Learning the different types of tennis strokes can be another step in becoming a tennis competitor.

If you want to learn more about injuries like what is tendonitis of the elbow?  Go to tennis elbow, tennis tips and tennis elbow can't wait video.

JOI Rehab can certainly help with the evaluation and treatment of all tennis injuries.  JOI San Marco also has the JOI Sports Center to help get you back into the game that you love.  Give us a call at 904-858-7045 to make an appointment.