Robotic applications have been present in manufacturing for decades, but only recently have they been applied to surgery.  The first robotic procedure in partial knee replacement was performed in 2006 and this application has now grown to include total knee and total hip replacements.  JOI and Baptist Medical Center began using this system in 2012 and now offers this option for all primary knee and hip replacements. The Mako Robotic Arm Assisted Joint Replacement Application, formally known as MAKOplasty, is now provided by Stryker Orthopaedics and supported by a complete team of technicians and sales representatives. 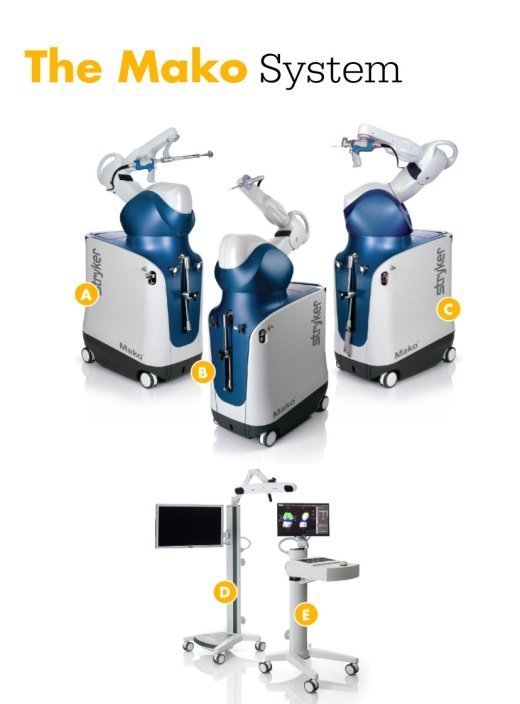 The concept of integrating technology in the operating room is not new and the Mako Robotic Arm Assisted Joint Replacement application was built off an earlier concept of “navigation” that allowed better anatomical targeting when implanting prosthetic joints.

The Mako Robotic Arm Assisted Joint Replacement system uses the same navigation principle and integrates a robotic arm that guides bone preparation in a highly exact fashion that lessens the variations that occur when performing manual joint replacement. Key to this is obtaining a CT scan of the hip or knee and creating a 3 dimensional image that can be manipulated on a computer to fully identify the joint anatomy.

The surgical implants can then be virtually positioned in the best location to balance stresses, align the components optimally, and provide the best stability to the prosthetic joint. Once the preoperative plan is completed, the surgical plan is finalized during the operation itself, allowing for further adjustments.

Total joint replacement has become one of the most successful elective surgical procedures performed worldwide and is expected to increase over 500% in the next decade. Despite this success, there remain problems in both hip and knee replacement that result in patient dissatisfaction in up to 30% of patients.

The benefit to the patient with Mako Robotic Arm Assisted Joint Replacement is an anatomically reproduced prosthetic joint that is better balanced, better aligned and should function more successfully over time.   People who have the Mako procedure done on their hip or knee generally have shorter hospital stays and less physical therapy sessions due to less blood loss, more preservation of heathy bone and smaller incisions.  These all lead to increased patient satisfaction and improved mobility over a shorter period of time.

If you have are a candidate for a joint replacement, then JOI has a team of experienced Physicians who specialize in Mako Robotic Arm Assisted Joint Replacement. Call 904-JOI-2000 or schedule online to book your appointment.