What Is The Rectus Femoris?

The rectus femoris is one of the four quadriceps muscles in the leg which is located on the anterior surface of the femur.   The rectus femoris overall function is to extend the leg at the knee joint and help flex the hip joint.  The rectus femoris starts from AIIS (Anterior Inferior Iliac Spine) also known as the bump in the front of the hip and it ends at the top of the kneecap to where it attaches. 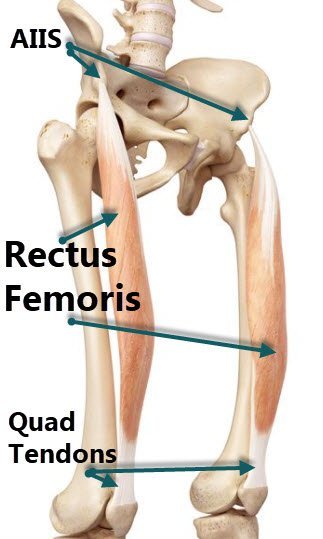 How Is A Proximal Rectus Femoris Strain Diagnosed?

The ideal situation after injuring the proximal rectus femoris is to schedule a doctors visit with either your primary care physician if you currently have one or with an orthopedic doctor.  Usually, your primary care physician will refer you to an orthopedic doctor to get a better set of eyes on it.  The doctor will ask you the who, what, when, were, whys and how’s the injury happened.  Depending on how severe the injury is, your doctor might send you for an MRI to see how bad the strain/injury is.  If the strain is moderate, the doctor might prescribe you meds to help control the pain as well as inflammation and send you to physical therapy.  If the strain is severe, especially if there is an overall loss of movement or function, surgery might be the next step.

In most cases, physical therapy can steer you in the correct path in trying to cure your proximal rectus femoris strain.  With your first visit with a Physical Therapist, they to will ask you the W’s of how you injured yourself.  Depending on the findings during the initial evaluation, your plan of care might include modalities (education of the use of heat or ice), a stretching program, a strengthening/stabilization program.  The principal of physical therapy is to make sure that you can return to a prior level of function prior to your injury and to educate you on making sure to avoid this type of injury in the future.

To schedule an appointment with a JOI Orthopedic Doctor at one of the 5 Physician Offices, please call 904-JOI-2000 or click the button below.

We Answer Your Questions